Eek.   Be careful with Gtalk or maybe Adium. I reached out to my friend in Australia, Stephen Collins (@trib), to ask him a question.  Although he appeared to me on my IM client, adium, as Stephen Collins, it soon became obvious I was not talking to Stephen.  Gtalk had somehow switched identities to another friend of mine, Jeanne Bissell-Privett in Ohio.  Could have been really embarrassing.   Sailors take warning! 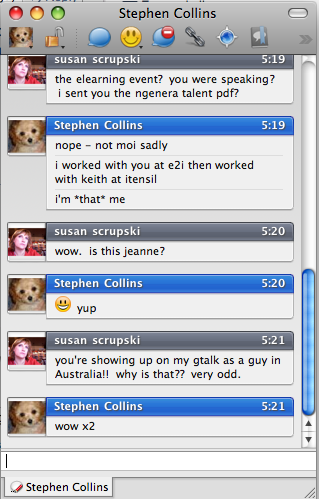 One thought on “Gtalk Identity Theft?”